Local cracker maker 34 Degrees prides itself on quality and philanthropy. The company’s founder, Craig Lieberman named the company after the latitude of Sidney, Australia, where he was studying diplomacy. That’s where Lieberman first discovered his passion for food.

In 2003, when he arrived back stateside, he started 34 Degrees as an import company. After about five years as in importer, Lieberman decided to stop looking for the best Australian products to imports; instead he would make the products stateside.

“When we decided to make them ourselves…we decided we wanted to take the best of the products we were importing and the best of products that existed in Australia and make it, in our eyes, a better product with more unique flavors and what we thought would appeal to the American audience,” Lieberman told CompanyWeek.com. 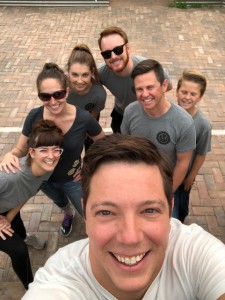 “For ten years now, we have been making our own crackers and doing our own distribution,” Jenny Cavanaugh, the Culture and Community Manager for 34 Degrees said. “Every single cracker is made in and distributed from Louisville, Colorado.”

Fresca Foods in Louisville handles the manufacturing side of the business and holds a 10 percent equity share in the company.

34 Degrees launched its line of crackers in 2007 at a Denver Whole Foods location. The company has expanded its reach to become available in Kroger stores (King Soopers in Colorado), Target, Walmart, Costco, Sprouts and other retailers.

Cavanaugh said the wafer thin, light and airy water cracker style is what makes them special, but it’s not all about the cracker. “There are so many crackers out there that add a lot, but they don’t allow the cheese or whatever your serving on the cracker to shine,” she said.  “It’s made in a way to highlight and not to detract from whatever else accompanies it.”

“Our cracked pepper and rosemary crackers are very popular. For a subset, a discerning palate, our natural cracker is the way to go.” 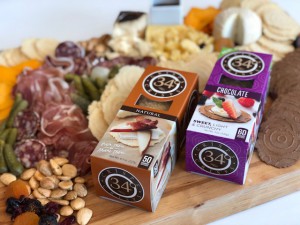 34 Degrees has expanded its product line in recent years. “We now have six savory flavors and four sweet,” Cavanaugh said. “Our sweet flavors are really great right out of the bag but are incredible when paired with certain cheeses. They’re really a double whammy product.”

Lieberman also owns the restaurant Call in the RiNo, short for the River North Art District, neighborhood of Denver. Call was recently named as one of America’s Best New Restaurants 2018 by Bon Appétit.

In addition to Call, Lieberman and 34 Degrees plan to grow. “We have some really super exciting things on the horizon,” Cavanaugh said. “We are trying to move into some of these flavors that are great on their own. There will be more to come in the area of snackable crackers.”

“We get people knocking on our door in RiNo just to tell us how much they love our cracker. We just love to sprise and delight our customers.”

34 Degrees is focused expansion, but it also gives back to the people Colorado. “One percent of all sales goes right back into the community.” Cavanaugh said. “It’s food donations and actual dollars.” The team also volunteers with Food Bank of the Rockie  and Project Angel Heart. “It’s a really big part of what we do … everyone here is really dedicated to giving back to the community.”

You can find 34 Degrees crackers in our Celebrate Local Harvest Basket!