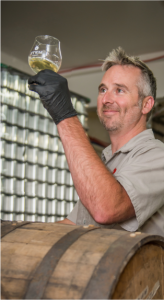 Colorado is a risky place to grow apples. With temperatures fluctuating year-round, crop yields hit-or-miss situation with farmers and later on—cidermakers. Ian Capps, Head Cidermaker/Lead Singer over at Stem Ciders, has seen it all.

Capps, a science geek from the start, studied environmental sciences and biology at CU, and while in school, fell into his passion by befriending a couple of brewers from Avery Brewing Company. “Talking to my buddies over at Avery, I realized that they had the jobs I really wanted,” says Capps, and his creativity wheels started turning. When he graduated in 2010, he applied for bio lab jobs…and a few local brewery jobs. He ended up getting a job distilling over at Stranahans, and then moved on to brewing at Epic over in RiNo, and in 2015, landed a job at Stem: “It was kind of a steep learning curve coming from distillation, to brewing, and then to cidermaking,” he notes. Despite the challenge, he learned the ropes, earned his place, and now, mindfully runs the show behind-the-scenes at Stem.

With such a high volume business (Stem produced over 100,000 gallons of cider last year) Stem doesn’t have the capacity at the moment to grow their own apples or press their own juice, but Capps keeps a close eye on sustainability throughout the production process with Stem. It all starts on the farms that Stem sources its juice from: “All of the apples that we use are considered seconds,” he says—which means that these apples are essentially gleaned, and either have fallen off the tree, didn’t grow into ‘picture perfect,’ uniform apple shapes, or show blemishes and dings that doesn’t make the cut with grocery store standards.

Once the apples are pressed, the remaining matter left in the apple press is called pomace. All of the pomace from Stem’s apple juice—which could potentially be tossed away—is either used as feed for livestock, or is spread out as a highly acidic pesticide to deter unwanted bugs. Not to mention, says Capps, that cidermaking requires less input or energy to produce, because cider doesn’t require a boiler, and it doesn’t need as much natural gas or water as brewing does.

Although most of the ciders over at Stem derive from apples outside the state for consistency reasons, one in particular fizzes Capps’ excitement: Crabby Neighbor. It’s made humbly with all Colorado fruit: some Crab and Granny Smith apple juices from the Hotchkiss area of Colorado. It’s a delicate cider: crisp, dry, floral, and has a high acidic content that requires special high ester yeast to balance out tartness and highlight the nuance aromas. On average, Capps notes, Crabby Neighbor has a 2 ½ – 3 week brewing method. It ferments for around 10-11 days to zero-out the sugar content and convert it into alcohol. It’s then racked or pumped from tank to tank for a bit to separate the leaves, sticks, stones, or any other unwanted solids from the good stuff. After racking, the cider ages for an additional 5-6 days in stainless steel tanks before being distributed to consumers.

Just a sip off of a glass of Crabby Neighbor will charm your palate with its zippy, juicy core. But what most people tend to overlook is that the Crabby Neighbor is a Colorado cider from start to finish, which means Capps has to hope each year that the state’s weather patterns will produce solid production numbers. “The apple harvest in Colorado is hit or miss at best,” Capps says. A late spring freeze can potentially kill off all of the buds in orchards around here. And against the odds, he notes, this year’s harvest has been plentiful. Capps let out a breath, relieved: “It’s been a great year for Colorado apples.”

And because of that, Capps has been tinkering with his latest project: he and his team tossed a line out in the beginning of September through social media, asking for Colorado grown apples or pears from people’s backyard trees. People can pick and deliver their fruit, and in exchange will receive $8 gift cards per 48 pound bushel they donate, plus a big growler of the finished stuff in the spring. People that can’t pick and deliver, can have the Stem team come over and help harvest. They’ve already got around 450 bushels, and will be collaborating with Big B’s in Hotchkiss to press the fruit. Stem’s first community cider will be available in the spring. “This is the first time we’ve ever done this,” Capps says, full of energy, and curious about what the resulting batch will taste like. “This is a community thing.”

Thanksgiving may look a little different this year, but you can still count on your local farmers and bakers to bring staples such as bread, apples, and potatoes to your dinner table.   Join us in celebrating sourcing food locally, seasonally, and organically to...

New Partnerships & Kids Cooking at Home September was a big month for Slow Food Denver. While continuing to expand our youth education programming, we are devoting significant time and energy to increase kids' access to healthy, nutritious and locally grown food....

Bring on the April showers! We could maybe do without the snow, but this is Colorado. Lots can be done now.  With many working from home, venturing out in the garden for a bit is the perfect opportunity to take a break, get some exercise, clear your head and soak in...

To our Denver community,  The Slow Food Denver team members are working remotely and our office is closed during this unsettling time. But we are hard at work to support our local food system. Community is at the heart of Slow Food, and at the heart of our food...