Larga Vista Ranch: A Tradition for the Future

Larga Vista Ranch sits along a dusty dirt road in Boone, Colorado, in a patch of prairieland between the Huerfano and Arkansas rivers. In early July, I got the chance to sit down with Doug Wiley, farmer and third-generation steward of Larga Vista, to talk about his farming practices and philosophies. Husband and father, Doug lives on the land with his family along with a herd of grass-fed dairy cows and cattle, pastured pork, and chickens. Doug is driven by a mission to protect and sustain healthy landscapes and healthy people through farming.

Doug’s father ran a commercial dairy farm here, which went under in the early 90’s, along with many of the other small family farms in the area. In his father’s day, there were upwards of 600 dairies in the state of Colorado; now that number is roughly 40, according to Doug. “There are only two of us left in this lower part of the valley,” he said. Larga Vista now consists of a 50-acre parcel (from the 300-acre original) and another 80 acres just down the road, inherited from an aunt.

Unlike his father, Doug doesn’t like to be pigeon-holed as a dairy farmer; “I’m a traditional farmer,” he said, comparing his work to that of his grandfather, who “did a bit of everything.” Today, Larga Vista is an incredibly well-diversified operation, with all the different animals carefully managed to maximize soil health and grass production. “A grass farmer is what I’d like to call myself, I grow the grass and harvest the milk out of it,” said Doug. 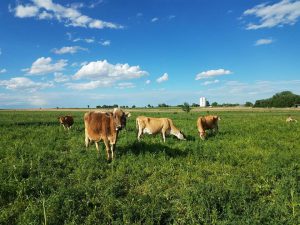 Larga Vista’s animal and vegetable operations work in tandem. “We have all these animals helping us build soil, then we break out the pasture every seven to eight years and plant vegetables,” explained Doug. “We have this huge built-up fertility. You put the plow to it and release it, in this burst of energy. I tell people, ‘I do all this stuff with animals and cows and cattle so I can grow better watermelon, better tomatoes’”

Above almost everything, Doug was insistent on the quality of his Larga Vista watermelons: “we’re famous for melons…in a valley that’s famous for melons,” he said. When pressed on what made them so special, Doug replied “It’s terroir. It’s all in the soil. You know it’s given a chance to develop, to rest. It’s like making wine with worms.”

Larga Vista’s commitment to the health of the land comes not only from a desire to produce the most delicious vegetables, but also from a strong environmental ethic at the core of the entreprise. “Its shown that rotational grazing, post-grazing captures more carbon than a forest,” said Doug. Through strategic management of livestock, Larga Vista aims to mimic the natural ecosystem of the land, keeping desertification at bay. “Without the animals, you’d lose the prairie,” he said. “Since there aren’t Buffalo out there, all we got left to keep that prairie alive is basically cattle. The prairie would just die and turn to desert without animals,” he explained. 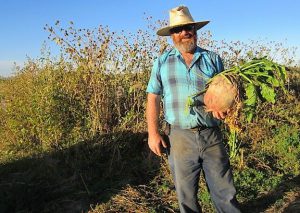 As in many parts of Colorado, water management plays a crucial role. Doug was adamant that watersheds deserve greater consideration when talking about food and agriculture issues. “Where we don’t quite yet link everything in that holistic system, it’s the watershed.” As an irrigating farmer downstream, Doug’s entire operation depends on water management. “If the ranchers upstream don’t take care of the land, then the river is going to flood and wash and silt all my irrigation, and you’ll lose the farm land. That’s how civilizations have died out in the past; a watershed that’s destroyed,” he said.

Because of the rotational grazing practices at Larga Vista, the water interacts differently with their land. “In these last few weeks of torrential rains, on other farms the water just pours off the field muddy. You go by our farm, and it’s telling: what’s coming off, it’s coming off clean, and there’s not a lot coming off.”

The style of rotational grazing practiced at Larga Vista is no simple matter, but a complex consideration of water, soil, grass, and livestock. Doug’s ability to navigate these intricacies traces back to a deep, long-lasting relationship with the land and the animals. When I asked about his decision to become a farmer, following in the family footsteps, he said he didn’t always want to, but one high school summer he helped out on an irrigation project on the farm and got hooked: “You spend time in the fields and you just absorb,” he said. Multi-generational farms like Larga Vista allow for intimate knowledge of the land to develop over time, and for and wisdom to be passed on. “That’s why we’ve got to keep these generational farms and ranches going. You can get to know a piece of land in a lifetime, but it takes generations for the land to get to know you,” Doug explained. It was clear how much his familial connection to the land meant to Doug. “I was too young to ever walk the land with my Grandpa, but he was always there teaching me,” his voice full of emotion. 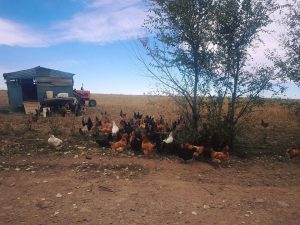 Similarly, the relationship between the land and the animals also requires long term involvement to flourish. Because of Larga Vista’s livestock practices, it takes generations of living on the farm for animals to acquire the hardiness and instincts necessary to thrive off the land. “You know, modern pigs don’t know what to do if they see the ground,” Doug said with a chuckle. “You can’t even put those pink pigs out in the field, they’ll get sunburned! They don’t have enough hair on them anymore.” But through years of raising pigs at Larga Vista, Doug now has a stock well-adapted to their natural environment; “we’ve been breeding pigs for long enough that we have a simple diet for them, and they forage, and it produces amazing pork. It tastes like the land.” Larga Vista’s dairy cows and cattle share a similar story. “It’s amazing how animals raised in a place, they just get better and better,” said Doug.

With his herd of dairy cows, Doug sells raw-milk shares – the only legal way to obtain raw milk in Colorado. Essentially, shareholders buy a share in the herd, and pay a monthly boarding fee in exchange for a gallon of raw milk each week. Through this process, shareholders not only invest financially in the farm, but mentally as well. “When we started I had no idea that when people become shareholders, most of these folks, they want the milk for their health. So it’s important to them. They become involved in the success of the farm. They worry for us when there’s storms—you just can’t buy that kind of loyalty.” Doug explained that when the Recession began in 2008, Larga Vista had just gotten back on its feet, and he was worried, but business didn’t slow down for them.

While Doug spoke humbly about his work at Larga Vista, a tint of pride colored his voice when he talked about being able to produce healthy foods necessary for his customers’ well-being. “Knowing that so many families need it for their health – that’s what’s been so rewarding about all of this,” he said. Doug told a story of twin baby girls born to a mother suffering from drug addiction, and were struggling on conventional formulas, until they started on a raw-milk formula using Larga Vista dairy. “I’ve seen so many babies like that. Struggling mother, couldn’t nurse them for one reason or another, and the formula is just so inadequate. And they get on this raw milk formula and you just watch them take off,” Doug explained. “I should try to take a count some time —there’s probably 50 families, or more, who started with us either during a pregnancy, or they got pregnant soon after. And now there’s all these kids that have been raised on our milk.” 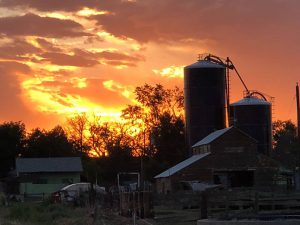 As Doug and his family learned more about the nutritional value they could bring to their customers through grazing management practices, providing healthy foods became a core piece of their mission. Through years of animal husbandry, Doug saw first hand how important healthy diets were to his livestock, and applied that same mindset to the foods he was producing for people, “It keeps my cows healthy, why wouldn’t it be the same with humans?” Nutrition now takes on a central role at the ranch, as Doug explained, “that really forms the basis of our mission on this farm, to produce the most nutritious foods.”

At Larga Vista, Doug and his family employ traditional practices and wisdom in innovative ways to meet the contemporary needs of both people and planet. Their multigenerational and diversified approach to ranching guarantees the future health and preservation land and water systems, while simultaneously producing maximal nutrition (and deliciousness) for their customers. Check out their website to see how you can get involved!